If President Zuma is Re-Elected

So it seems President Zuma may be re-elected at Mangaung this week. Should this happen we will once again be reminded of his resilience and ability to withstand resistance and opposition, aided by ANC culture and a picture or agenda that does not seem to be well communicated to or understood by ordinary South Africans or even Alliance members.

Even recently one would have thought that the anti-Zuma campaign enjoyed clear momentum, with bold individuals like Julius Malema acting as front men. But as happened a few years ago when there seemed to be an anti-Zuma media drive to prevent him from becoming President, he rises to the top. I wrote this a short while back: “President Zuma is exceptionally resilient with a proven track record of overcoming any obstacle thrown at him, which means if anyone can turn around a situation that gained momentum in the wrong direction, then he can.” I also commented at the time that “It could very well be that being elected in Polokwane wasn’t only as a result of his resilience but also the resolve by top leaders within the organization to appoint him at any cost”.

The likely achievement of being re-elected may in part be because of his streetwise ability to manoeuvre ANC culture and processes, or it is because of a noble and/or selfish agenda, clear or unwritten that necessitates his re-election? The question that many will feel they know the answer to is whether or not he will be re-elected because he is a great leader, with the necessary credibility and abilities to move SA to the next level? Surely this is why an individual becomes the leader? Or, is it so different in politics?

We have written extensively on this platform about President Zuma as a leader – his strengths, weaknesses, decision making style, what holds him back, the context within which he leads, and much more. There is no doubt in my mind that if his credibility had not been tarnished through past acts (some perceived and some real) he would have been viewed as a reasonably good leader.  Bear in mind that leading the ANC and by default SA, as an ANC member with a National Executive Committee (NEC) structure breathing down your neck may carry some positives, but it could also inhibit a leader from coming across as a so called strong leader. And holding Nelson Mandela up as an example of a leader that achieved this does not change my view as he was an exception and led in a completely different era.

We saw Former President Thabo Mbeki attempting to assert his leadership and what happened? The real leader – NEC – pulled him back. The President of South Africa does not lead South Africa, the NEC of the ANC does. While this model safeguards SA from following in the footsteps of other African countries where dictatorship became the order of the day, it does not easily allow enough space for a leader to lead with vigour, speed and power.  We may be forfeiting one good thing for another.

Nevertheless, from a leadership context, should President Zuma be re-elected, what are some critical elements he or whoever ends up as President should at least focus on during his next term?

The above three areas are universal when it comes to leadership, and were highlighted by Mike Brown, CEO Nedbank during a recent leadership conversation with him.

On a more personal note, if President Zuma is re-elected he will have to work harder on his brand, reputation or credibility. His challenge though is that some of the unresolved issues will remain such and will therefore always be a weight that pulls his credibility down. Some time back I heard the tail end conversation between President Zuma and Rhedi Hlapi on Radio 702. She asked him whether some of his own actions have contributed towards his tarnished reputation (I paraphrase). His answer was in essence that he did not think so. That was an ideal opportunity for him to respond more openly, sincerely and accurately. He should have explained that he has made mistakes as he is human, but that he will continue to try and live up to what is expected from the Office of the President. We wrote this recently, directed at President Zuma: “Make correct and values driven leadership decisions; ensure his behavior here on forward matches the values of his followers and what he promotes in word; confront the past perceived ‘out of line’ behavior head on; put in place a more 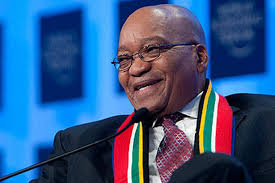 exciting, inclusive and forward looking vision that ensures a legacy that all South Africans can buy into. However, he cannot afford another corruption charge or be the accused in a rape case or be engaging in behavior that many South Africans may believe to fall in the category of infidelity or dishonesty. He must stay clean because such acts send a message of a lack of integrity even to those that may agree with his moral or traditional values.”

Leadership is a strange thing and much of what individuals learn regarding leadership is so often unlearned during the pressure of their job. Many leaders that function at the top for some reason believe they need not proactively do something to remain “Leadership Fit”. Just like one can become physically unfit when consistent exercising comes to a halt, in the same way a leader can become leadership unfit in his thinking if he does not find a way to continually sharpen his leadership senses, philosophy and beliefs, within the context of the current challenge. President Zuma, and in fact most top leaders have advisors that give regular input on technical and functional matters, yet the largest portion of their job is to lead. So, why not have someone or several experts that continually advise on leadership, to be the leader’s leadership conscience?

With healthy leadership and not only political advice, President Zuma may have acted differently around challenging issues like Marikana and the prolonged Malema saga.  President Zuma should surround himself with leadership experts and not just technical experts.

I conclude with the same words written at the end of an article about the President Obama and Governor Romney race: “Ordinary South Africans on the ground have grown impatient of the charm, audacious promises and motives of political and other leaders, which include leaders with admirable struggle credentials that used to be able to calm the stormy emotions of masses. They want to experience movement that positively impact their lives, though often unreasonably so. We would do well as a nation to view our own candidates for the ANC leadership race against their “movement credentials” (past performance) rather than based on emotion, likeability or other hidden agendas.”

As I have written before, in a world where the trust deficit between political leaders and their followers seems to grow alarmingly fast, SA needs a leader that will have the collective trust and respect of citizens – someone that generates positive movement and whose deeds are congruent with his words. Though a reasonable expectation, strangely it is starting to feel more and more difficult to achieve in today’s morally declining world.

Article featured in the