Gary Player, for me represents energy, positivity, tenacity, endurance and understandably so, confidence. Some of the values that drive him seems to be discipline, hard work, love, a desire to improve in every respect and a strong faith in God.

A senior leader in a business shared an interesting story with me. While on holiday in Plettenberg Bay, his son, who is a sports fanatic, came home from an evening with friends, very excited: “Dad, guess who braai’ed for my friends and I tonight?” He answered for his Dad… Gary Player.

Apparently Player’s granddaughter invited this group of friends over to their place and not everybody knew exactly who she was. When they arrived there she announced that she was going to ask her grandfather to braai for them. Well, Oupa agreed and only when he arrived did everyone realize that her grandfather was the legendary Gary Player. He did everything from building the fire to braaiing the meat. He has a zest for life, which I will add to my list of attributes above.

Myself and two retired gentleman whom I admire and whom Player allowed to sit in on the interview met the 74 year old icon in the foyer of The Palace hotel. He energetically greeted us and made us all feel welcome in an instant.

On the way to his room the lift was a bit slow to arrive so we climbed the stairs. He comfortably climbed two stairs at a time while explaining that he never climbs one stair at a time. I promptly changed the way I was climbing the stairs.

Player in my view is one of the greatest Ambassadors South Africa has ever had. And of course he has managed to be this even though he is not perfect. Some perceive him as slightly arrogant while others view him as humble. Such opposing views are to be expected of one that walks in such utterly unique and almost unmatched shoes. Also, his incredible discipline and confidence can easily be mistaken for arrogance, in my view. Ultimately, transcending all opinions of him is the fact that probably everyone worldwide respects him and he deserves it.

I tried to understand whether he always sensed there was greatness in him – that he would accomplish something special in his life. He explained that his Mother died when he was 8. His 17 year old brother went to war and his sister went to boarding school. Dad worked long hours in the mines. At the age of 8 Player had to wake up at 5am, prepare for school and get there on his own via a tram, bus and walking. It took him about an hour and a half to get to school. In the afternoons he would attend his sports activities and go home to an empty house.

He said: “I suffered a lot, which is the greatest thing that could have happened to me at the time”.

He was driven to succeed because of the adversity that he faced and because he had nothing. He explained further, to be successful you also have to have a passion and, in his own words “work your butt off”. This is what he had to do from a young age and continued this habit throughout his life. In fact, that very morning of the interview he rose at 5am to hit some balls, even though his golfing career is over. He does this because “I want to keep my body in shape and I want to see people, share love, discuss!”

He loves people! In fact he believes one of the principles of happiness and success is to love – really care and have compassion. That same morning, on his way to the driving range at 5:30 Player walked past the lady cleaning the passage floor, stopped and then thanked her for keeping the floor so clean every day. What a difference this would have made in her life, and he did not know her from a bar of soap. Almost everybody in this world would walk past the cleaner. At best some would greet her.

Player immediately owned up that acting like this is a gift God has loaned him. In fact, he calls it a gift of being a champion – champion of golf, champion of love. This gift he believes can be taken away anytime and before he could earn it he had to be given suffering from a young age.

Being surrounded by difficult circumstances, suffering, somehow placed him in that frame of mind where he subconsciously thought to himself that if he received a chance in life he would grab it. His first chance was going to a great school – King Edward VII. He commented that had he not gone to that school he never would have become a champion. 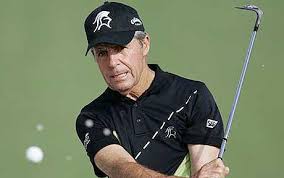 He refers to the “little white ball” as another ‘chance’ and it opened up unimaginable opportunities of appearing before more people across the world than any South African in our history.

Success for him is simply attaining your goal, whatever this might be. But, while striving towards this goal one is only truly successful if one is humble enough to have respect for other people and realizing that one can always learn from somebody else. Being a champion is also about making a sincere effort and even if one does not necessarily achieve exactly what one set out to do, but the sincere effort was there, one is a champion.

His life experiences range from having dinner with every American President for the last 56 years to eating pap with his fingers in Soweto and with the workers that helped build the Sun City Golf course.

Yet, after all his great experiences, in his view the single most important thing one can obtain in life is love in one’s heart. This gives one the most happiness. In his words: “If you asked me if I get more happiness from being the only man on the planet to have won the grand slam on the regular and the senior tours or from the love in my heart, I would say to you I get more happiness from having the love in my heart”.

According to Player what really moves people is when you give them love – “If you see someone on the veranda and you give them a smile.”