During my interview with Victor Matfield he took a piece of paper from his pocket. The information on the page was entitled ‘self knowledge’ with headings: strengths, weaknesses, changes and principles and values. Under each of these headings were written 4-5 points.

He wrote this page in 2004 after his first and not so successful year as Captain and then started working on the things he wanted to change to become a better leader. Obviously this exercise made an impact as he still has the list almost five years later. Today he feels confident that this simple process made a huge difference in that he is a better leader as a result of it.

What did he do? First, he was humble enough to want to improve; second, he made time to think about his key strengths and weaknesses, what he wanted to change and what his principles and values were; third, he wrote it down; and fourth, he consistently worked on the list.  What does this tell us about the man?

He has an attitude of improvement, growth, being better today than he / the team was yesterday and confronting the necessary obstacles to improvement, which I would call a “seamless attitude”. Heyneke Meyer confirmed to me that Matfield transformed as a leader and grew a lot; that he is always a hard worker; that he leads by example; that he is professional.

One of Matfield’s weaknesses in the early days, which is listed on his ‘self knowledge’ page, was staying calm under pressure. He lost it with referees; he was impatient with people around him. So he had to learn to stay calm under pressure – to calm down; think about what happened; think what can be done; then only act.

Today he believes, the more pressure there is the calmer one should become. Eventually this weakness has become a strength that he brings into the Springbok team, even though he is not the captain.

He is undisputedly the best lock in the world! He has been an integral part of teams that have played in and won several titles, including world cup, super 14 and tri-nations. In some of these games he was the captain or vice-captain on the field.

Still, he comes across as a humble, down to earth guy. But, this ‘humility’ has of course been tested over the years, as is the case with every young sports person that is suddenly catapulted into a life of stardom. He too went through a phase where the threat of starting to become more passionate about all the ‘fringe benefits’ of being a top sportsman was looming.

In other words, his passion for rugby that brought him the stardom was almost replaced by more passion for ‘side shows’ – attention, money, and so on. But, a caring coach with vision and passion for his players had the courage to sit him down and confront him about this diversion. The coach was of course none other than Heyneke Meyer, one of the speakers at our 5 November “Seamless Leadership in difficult times” conference.

This courageous conversation managed to capture the attention of Matfield and change his behaviour and attitude, because there was mutual respect. More specifically Matfield respected Meyer and today all rugby lovers can be grateful for a coach who did what was necessary and a player who was humble enough to listen and change. This is great leadership in action! 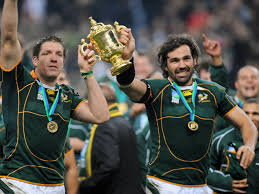 We can today enjoy watching a world class player who somehow manages to always stay in peak form mentally and physically. Matfield seems to never hit a slump! He is consistently excellent, smart, committed, and hard working! How does he do this? Well, the man remains passionate about rugby. He does not get tired of playing, training and thinking about the game. When other players walk away from the practice he remains behind to talk, discuss and think about how to improve even more. He draws his energy from doing what he loves and of course his values also indicate where he believes his strength comes from. The first value on his list is ‘believe in God’.

Consistent and correctly channeled passion, as an ingredient of consistent peak performance always rears its head. I met with Ivan Epstein the CEO and founder of Softline recently to discuss a specific project. But, within a minute he was on his feet at the ‘white board’ drawing pictures of new and radical ideas of how they were planning on growing their business. I am sure he is as passionate about Softline as he was in the very early days. This is why the business continues to be successful – his passion is channeled correctly and consistently.

Matfield is the same. He loves rugby and he can clearly imagine being involved in the sport for many years to come. I believe the sport will be better off for it. It is fairly common knowledge that the springbok coaching team involves him a lot in planning and strategizing games. His opponents have respect for the intelligent way in which he plays.

While his passion and mission is rugby, it expanded over time to include making a difference to people through the sport. He remembers seeing a disabled lady in a wheel chair with her springbok jersey on and realizing that even to her he and the team meant something; that they were somehow impacting on her life.

I asked him how one motivates a winning team to consistently win, rather than become arrogant and then go down the slippery slide of consistently losing. His answer was very interesting. He believes it is easier to criticize or point out areas for improvement of a winning team than it is for a losing team.

A winning team is confident and their self image is healthy, so one can point out areas for improvement with boldness, while this is not always possible with a losing team.

To him it is logic that when one is on top others are going to keep striving to climb on to your level, so you need to make sure that you are consistently working hard to climb even higher.

He believes the core of a successful team is when they are like a family; when every member feels like he wants to walk the extra mile for the other team members; when one plays for one’s team; when every individual knows what the team stands for; when there is character.

He really believes that to be successful one must be consistent. To be consistent there must be passion and hard work. One needs to do the same things over and over every week.

In my view this principle applies in every area of our lives, especially those areas in which we want to be successful – family, at work, exercise, health and so on.

Matfield loves South Africa and dreams that we will continue maturing in our ability to see the positives and work on solutions together. Sometimes we are quick to complain and forget to look at how to improve. In my view, Matfield is a true South African with a Seamless Attitude, a Solution Attitude.