At a time when many leaders are faced with extraordinary challenges throughout the world, and considering the upcoming Olympics, we thought it appropriate to place this article about one of our sports icons, Natalie Du Toit.

Many of us know that as a talented swimmer and 17 year old matriculant, who almost qualified for the 2000 Sydney Olympics at the age of 16, she lost part of her leg in an accident.

Not only did it seem like her swimming career was history, but when she eventually returned to school she was held back a year while watching her peers complete their final school year. At the time, the effect of her medication was that she would often simply fall asleep, no matter where she was. While these were difficult times she casually yet sincerely explains that she made new friends.  It is also important to understand that not only did it seem like she would never be able to compete, but she actually loved swimming; she loved being in water; it was a passion! She decided to swim again and even compete, but had to start off in the slow lane. One can only imagine what it was like for her to eventually stand in front of a crowd once again, but this time without part of her leg, about to compete in her first race since the accident.

What drove or motivated Du Toit to pick herself up from a major setback in life? When she was even younger it was simple – swimming! I suppose this drive was strong enough for her to get back in the pool, which highlights the power of following a ‘passion’. But, she did not lie in bed and make a once off decision that she was going to the Olympics again.

She made one small decision at a time to take a next step towards living again, not giving up, which probably went something like this: first step, just back in the pool; second step, participate in some tournament; third step, set sights on an international event; fourth step, to qualify for the Olympics in 2008; fifth step, to perform well in the London Olympics – even in the top five. As she took each step her belief that she could achieve more grew and so did her confidence.

What drives her today? Swimming is still up there. But as she matures and grows older she loves being in the presence of people she can learn from. Also, her message to others that have run into tragedy is to get up, go out and live.

When she was 12 yrs old she approached an athlete for an autograph. The athlete swore at her. On that day she vowed to never be like this athlete should she become famous. I don’t think she ever dreamed of becoming the icon that she is today. When people want her autograph she does her best to accommodate them. She also visits people in hospital that may for example have lost a limb, to somehow inspire them to move on and live. What drives her is more than swimming only.

Was what happened to Du Toit at the age of 17 really a setback? Ironically, I don’t think so! It was an experience that put her on a more visible platform from which to inspire the entire world!

So, perhaps the so called setback was a blessing; a defining moment after which not only one major choice but several smaller choices led to something greater.

Each of us need to remember to ask ourselves this question, when an experience like being retrenched, or having to close a business, or losing a loved one, or not achieving important objectives, feels like a setback: “One day when we look back at this experience will we want to see it as a) a setback or b) a defining moment that flung us on to another platform that led to something greater?”

Du Toit is a magnificent asset to our swimming sport and South Africa. I truly hope Swimming South Africa and we as a nation realise this. 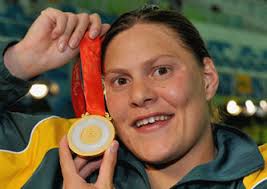 BRLP: How are you feeling about the goal to perform at the London Olympics?

Natalie: Scared but excited, it’s a great honour to be able to represent the country at this level.

BRLP: How important are values in your life? Does it play an important role in leading yourself?

Natalie: In my opinion, values are the single most coveted quality a person may be in possession of. Circumstances and the world around us may change, but it is our values that need to remain constant when tested.

BRLP: Please share your version of the latest incident in which you were disqualified?

Natalie: I was disqualified for “unsporting behavior” I can’t understand it, I know I watched my line and kept to my rhythm. I didn’t punch hit or do anything illegal. The FINA rule OWS 6.3.2, clearly states that I should have been removed from the water. The referee said he called in to submit the infringement, that’s not true; I was in the water for over 45 seconds after the finish. The red Flag and card bearing my number was never raised on the boat. This clearly states that the call was not made on the boat, but on shore. The only FINA experienced official that was there was not consulted. I feel sorry for my opponent, this must be the worst way to win a competition.

BRLP: What have you learned from this incident?

Natalie: That due to bad leadership on the part of the tournament director, the proper skilled referees were not used!  We had a FINA international experience official that was present, but he was used to record time. This shows insecurities. A good leader must always respect and use competencies and knowledge to improve the situations. Manage and lead people to success, grow people, and always look at right before the wrong.

BRLP: What have you learned about what good leadership in sports means?

Natalie: Use the right skills for the right jobs. Don’t be insecure; learn from people around you; it’s ok to make mistakes. Don’t play the man, play the ball, move out of the box and take decisions based on fact and not emotions.