The recent Marikana incident that dominated news headlines locally and at times internationally deserves an objective analysis from a leadership perspective, which not only dwells on negative and possible failed leadership. Cyril Ramaphosa’s comments that all parties are to blame to some degree are probably not far off the mark.

Following such a gruesome incident it is difficult to even contemplate that one could extract examples of good leadership from it. Nonetheless it is so that during difficult and crises times leaders are presented with an opportunity to demonstrate great or failed leadership, the former being achieved when at least two ingredients are present – experience and pure motives. Experience allows the leader to ‘tick the boxes’ and do what is expected, necessary and perhaps a little more. Pure motives bring out the genuine caring, the humanness, instincts and inspiration that at times may contradict experience and should even override it.

I asked myself whether local leaders, the General Manager and his team, or Lonmin senior managers could have prevented this scandal by applying humble yet powerful leadership principles. I know capable leaders at the General Manager level in large mining houses who would not have allowed any form of contention to escalate to such an extent. But to be fair, there are always exceptions and this seems to be one of these.

A current leader in the platinum industry that has led a large mine before told me the following: “Having been a General Manager myself and spending most of my working life in or around mines my answer to whether or not a GM and his team could have prevented this tragedy from happening is an irrevocable NO. From a management perspective even with the luxury of having first-hand knowledge of the situation at your operation, a showdown between two unions is not something that you can control“.  He further adds: “Even if management walked the ‘extra mile’ and intervened between NUM and AMCU it would have been an impossible task to convince NUM to surrender some of their power to AMCU who has persevered in their mission to ‘dethrone’ NUM as the majority union in the mining industry.”  Other leaders confirmed to me that these comments are accurate.

This does not bode well for the mining landscape and should the following comments be accurate the situation worsens: “AMCU’s thirst for power will not be satisfied until they have gained majority membership and they will stop at nothing to achieve their goal. The truth of the African saying ‘When the bulls fight it is not only the grass under their feet that gets hurt’ will surely now be much better understood.”

Against this backdrop, let us start at the top. President Zuma demonstrated text book leadership by cutting short an important trip to engage the horrible incident. He refrained from inciting more emotion with rash judgments and decisions, which is the correct approach following such a difficult and still volatile situation. He promised and delivered soon after on instituting a Commission of Enquiry that will bring to bear the facts of what really happened – again, delivering on promises is so important after explosive events, to neutralize and bring back some sense of order. He was trying hard to avoid jumping the process of making decisions based on facts rather than emotion, which helps in such emotionally charged situations. Some feel that a decision to put in place a Commission may be driven by a lack of assertive leadership through decisive decision making. But this is not necessarily the case.

However, as some may say, these actions were too little too late. President Zuma probably delayed his return trip too long. Why not do so after ten people were killed? Could it be that his judgment and motives were clouded because NUM is an open supporter of a second presidential term for him? One can’t help but believe that President Zuma is aware of this union power struggle and that he may at the very least have been tempted to channel his support towards the powerful NUM, at the risk of it getting out of hand, which it unfortunately did. When he returned to Marikana he did not clearly return to the people but to the media instead, though it was at the actual mine, thus creating the impression that returning home was a mere ‘tick the box’ exercise, dictated by his own experience or that of advisers around him. He later returned to address people on the ground, possibly to recover from this earlier mistake, and perhaps prompted by the visit of his nemesis Julius Malema, which was to the people. The above leadership indicates experience, but places huge question marks on President Zuma’s motives during this sensitive period and leadership test. In difficult times great leaders return to the source, where the most pain and trauma is or was felt, especially when their motives are intact.

Our National Police Commissioner, Mangwashi Victoria Phiyega found herself between a rock and a hard place. She is a newly appointed leader for whom it is vital to gain high credibility amongst her follower base as soon as possible. Defending the actions of her officers during this difficult time seemed to present itself as a great opportunity in this regard. At the same time she really wasn’t in a position to make a sound judgment as to whether her officers were in the right or wrong. It seems she chose to defend her men and woman in uniform, leaving her with a fifty per cent chance of either increased credibility or huge embarrassment. Her motives may have been pure, but her inexperience could come back to haunt her.

As one newspaper headline indicated: “Mine massacre: Enters Malema”. Like it or not, Julius Malema has yet again positioned himself as a relevant leader around this major incident. Unlike President Zuma he went straight to the people (the source) and addressed them. This is clever leadership and in this regard Malema often gets it right. 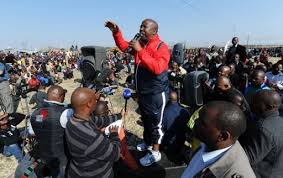 He did however show his inexperience and perhaps questionable motives by squandering an ideal opportunity to defy perceptions that he is driven by selfish political motives. Instead he strengthened such perceptions when he attended the funeral and clearly abused the platform by uttering insults to government. This was immature leadership at best – whether these comments were true or not is irrelevant. It was an ideal opportunity to express genuine interest in the person on the ground by setting aside his focused objective of toppling President Zuma and instead sharing a deeper, meaningful message of hope, with some spiritual perspective. He missed a golden opportunity to demonstrate that he is a leader with more depth than mere political thinking and ambition.

In crises situations a leader’s depth of life experiences and emotional and spiritual maturity should bring the best out in them. We need such leaders in today’s complex society.

The impression created about Lonmin leadership is one of tardiness and non-caring. However, with the larger political and labour battles in progress, one feels that they could not necessarily have prevented this incident. Should they have been more visible, present? Should they have found a way to return to the source, where the most pain and trauma was felt? Perhaps, but then again this may have been unwise and downright dangerous. But they do not receive a ‘get out of jail card’ so easily. The question for them is, to what extent are they working on improving their overall culture of caring for employees, their welfare, working and living conditions? How pure are Lonmin management’s motives?

Union leadership seems shocking and exceptionally selfish to say the least. If this incident is a simple case of a power struggle one finds it extremely difficult to formulate words to describe just how selfish their leadership is. How insincere can leaders be when on the one hand they profess to fight for the rights of the poor, while on the other hand they are willing to exploit their followers by pushing their selfish agenda to a point where so many lives are lost, so many families are impacted for life.

One thing is clear – difficult or crises moments highlight inexperience and hidden motives like few situations can. Some of this happened during this sad chapter in our new democracy.