Home  |  Models, Principles, and Behaviours  |  Leaders Look to the Future

Leaders Look to the Future

Listen to this powerful statement Dr Mamphela Ramphele, founder of the Citizens Movement for Social Change, made a couple of weeks ago at a media briefing in Cape Town, ahead of an international leadership education conference:

“I want to make sure my three-year old grandson, in 30 years’ time, is in a country he can be proud of; and that will not happen unless we deal with the legacy issues which are holding us back.”

While we are not going to explore what legacy issues she is referring to, what we can take from her comment is that she understands that we need to look to the future and stop blaming history in order to make changes happen.

On 14 October 1968,  Jim Hines ran a time of 9.95 seconds to win the 100 metre sprint at the 1968 Olympics, setting a new world record and also becoming the first person to officially break the 100m, 10 second barrier. Almost nine years passed before the barrier was broken again, this time by Silvio Leonard who ran 9.98 seconds on 11 August 1977.

For years, Leonard had been pushing himself through different stages of growth and speed, motivated by Hines’ breaking of that barrier.  And it has been broken by many men since.

Had that record never been set, perhaps we would today see the Lewis’s, Greene’s, and Bolts of the sprinting world still the fastest men on the planet, but with slower times.

Not four months ago we saw athletes from all over the world come together to compete for arguably the highest honour any sports person can ever have – Olympic Gold.

Each and every athlete that participated is an example of motivation and learning being sourced from past events.

Our past gives us context. This context helps us to understand what we have done well, and where we have failed, and this in turn provides the information we need to make decisions to carve out our futures.

While contextual understanding and awareness are essential, we seem to have created a culture in our country of living in the past, of not moving past the “legacy issues which are holding us back.”  This culture has moved into our homes, social circles, church and community organizations, government and businesses.

Our past should not hold our futures ransom but should rather provide a foundation and springboard for future advancement and growth.

So we can say that history gives us directional clarity

Why do some organizations and countries seem to dominate headlines and the world stage?  Why are these countries and companies consistently ahead of the rest?  The answer in most cases is that they leverage the successes as well as the mistakes, misfortunes and failures of yesterday.  They create positive movement through the increased understanding history provides them, and then they leave it behind them.

This is not to say they forget their past and bury it. Rather they do not allow the past to hinder their future movement and forward progress.

It takes a very mature leader to be able to analyze past events that may be emotionally charged and are filled with voices that seem to call for retribution and retaliation, and emerge with a vision and direction that are proactive and serve all stakeholders.  But this is the opportunity that history provides for us all.

Too often we have seen one dictator displaced by someone promising something better, only to find that he or she employs the same or similar strategies to run their country.  In the same way, too often organizations are handed over to new leadership that feel they have a new and exciting vision, but they employ the same processes that yield the same results.

An example of successful learning from history can be seen in the story of the Finnish education system, regarded today as one of the top in the world:

“Finland is a relatively young country, having only established its independence from the Soviet Union in 1917.  Finland had to fight long and hard to preserve that independence through the Second World War… The education system that the new post-war parliament inherited was still unequal and more reflective of the needs of a predominantly rural, agricultural society than of a modern industrial society… In 1950 most young Finns left school after six years of basic education; only those living in towns or larger municipalities had access to a middle grade education…”

Their education system sounds like it functioned much like our own does at the moment.  They had every right and opportunity to blame and point fingers at their history and struggle, but they didn’t.  Instead they looked at the outcomes and history of their current system and realized that things needed to change.

“In the post-war decade, parliament created three successive reform commissions, each of which made recommendations that helped build public support and political will to create an education system that would be more responsive to the growing demand for more equitable educational opportunities for all young people in Finland.”

They have gone on to being “one of the world’s leaders in the academic performance of [their] secondary school students, a position [they have] held for the past decade.”

History helps us to analyze and proactively realign.  It gives us direction.  We learn from it. 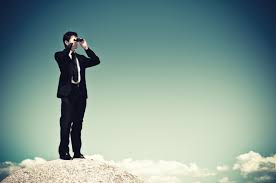 What has this got to do with you in your leadership role?

As a leader you move things.  Movement needs to be forward and upward.  Anything less and you are failing as a leader, and cannot really be regarded as such.

In order to create this movement we need to be looking in the right direction, and that direction is the future.

Some of us are so concerned about yesterday’s numbers that we cannot see today’s opportunities.  Some of us are stuck in the quagmire of yesteryear’s failures, and are holding others back.

I believe we as a country and nation are 20 steps behind where we could have been if we had only focused on things that will right the wrongs of the past through a natural, organic process of growth and development.

More from Dr Ramphele:  “South Africa needs to wake up from the complacency that has allowed us to tolerate a failing education system for more than 18 years. It is no longer plausible to blame apartheid for our appallingly poor education and the shocking conditions under which teaching and learning occur in our society.”

It is time, in our varying positions and spheres of influence, to change our approach.

We need to look to the future.  Create a vision.  Align or create processes or practices that will serve that vision.  And add the necessary, relevant structures that are needed to give these processes and directional elements substance.

This article was featured in the