Home  |  Models, Principles, and Behaviours  |  How to Successfully Move Your Team and Organization

How to Successfully Move Your Team and Organization

A few days ago I sat in on a day long leadership development session conducted by Adriaan Groenewald, with key leaders of a large mine. It was a valuable experience in the exercise of honest, courageous and seamless leadership. During the course of the day we experienced a tangible shift in attitude amongst the group of managers present. The situational and attitudinal positioning process used by Adriaan has been applied successfully hundreds of times in the past. Yet it remains an invigorating experience to feel the change in attitude of the participants in the process.

Testing background for mine management

The managers involved in the session are responsible for the core business of mining deep underground. Believe me, this is not a game for weak leaders! It is a dangerous industry where safety is considered the most important value and objective of each worker in the mine, yet they are required to maintain a high performance record as well.

We have many deaths on our roads every day, but mostly nobody really blames the engineers who design the roads. We have fatalities every day occurring on the operating tables of our many hospitals, yet we rarely see reports of condemnation of the surgeons involved. Yet when a fatality occurs in the mining industry, the news often rebounds all over the media. The mining leaders and workers on and under the ground have to perform while they are expected to treat safety of workers as their first duty. They are tasked to move tons of rock bearing minerals every day and if they do not do this the mine can go under and thousands can lose their jobs. It is against this background that the leadership development session was held in order to help the attendees perform at a higher level while meeting stringent safety requirements.

The process facilitated by Adriaan on the day requires a high level of honesty in identifying perceived and real obstacles and barriers to progress. This part of the process can often be very painful and emotional and also confrontational. In this instance, the General Manager, a very experienced miner and leader, exhibited a fearless attitude of openness and courage in encouraging his people to be completely honest and open about their feelings. As the day progressed, the feelings of the group became focused on the positive aspects of their situation. This resulted in a tangible boost in unity and mutual respect amongst the people involved. It was a good experience for me and no doubt for the others involved.  It was not the first time that I experienced a positive surge in mood in groups of leaders, but it always remains one of the great experiences of life to share the spirit of people who want to make a difference.

This article is not really about the particular Mine, but about universal principles that govern positive movement. At the core of positive movement of change and growth is the embracing of a seamless attitude that motivates us to move barriers to full potential. I was sitting with a top engineer the other day in a personal leadership conversation and he told me that one thing that frustrates him is when people say something ‘cannot be done’. He firmly believes that our attitude determines our ability to perform. Most, if not all, of the top performers we have met over the years would agree with him. 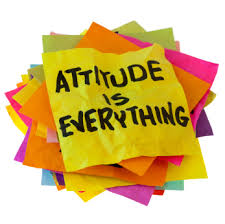 I have often been present while really tough and apparently inflexible people undergo significant changes in attitude if the proper process is followed.

In the session with the miners mentioned above, we can look at some of the universal attributes applied by a trained facilitator and leader to guide people towards an attitudinal change for the better. This corresponds with the idea presented before in this column of honouring those who are sharing, respecting and performing (SHARP) leaders.

In the session the facilitator and general manager adopted a frank and sharing style. They resisted the inclination to revert to a predominant ‘telling’ style. They listened, and sincerely encouraged an open discussion of concerns by the group.  In the process they shared their knowledge by conversing in principles rather than resorting to personal accusations. The responses of the group generated a climate of sharing amongst all the members of the group.

Sharing hard won knowledge and wisdom is not simply a case of ‘telling’ others! It is generally recognised that the person receiving knowledge needs to go through a mental as well as emotional process of taking ownership of that knowledge or skill. Wise leaders know this and therefore commit themselves to tested processes that guide others to take ownership. Often such ownership may be accompanied by some mistakes, and this may be a necessary part of the convincing process. Certainly encouragement of free expression can help significantly in measuring the level and degree of ownership taken.

Considerable attention was paid to treating the attendees with respect. Respect was demonstrated in various ways, including the asking of pertinent questions and listening carefully to the responses. I could feel how the members of group were developing a new found respect for each other as well as for their senior leaders present. In the process the group developed an increased desire to live up to the authority and imperatives of their positions of core responsibilities.

The process does not stop at sharing and respecting, but demands from the group present to participate passionately in formulating and taking ownership of actions that generate a measurable increase in performance. Somehow the imperative of leaders to perform adds immeasurably to the first two attributes of sharing and respecting. Without a passion to perform, a sharing and respecting person simply becomes a ‘nice’ guy or lady. We need to perform while we share what we can offer and also respect all our stake holders. It is especially important in the multicultural and diverse social make up of our country that we encourage and develop leaders who share, respect and perform.

The spirit of SHARP leadership demonstrated during the day’s training session is exhibited all over the country on a day to day basis but needs to be expanded a hundredfold. The benefits of such a leadership approach are often extraordinary. A heavily pressurised work environment (such as the mining industry for example) and our own individual work place can become much more of a happy and enjoyable experience when we share, respect and perform.