Our influence for making a positive difference is the measure of our success as leaders. Leadership influence may be defined as the effect that a leader has on another person or situation.

I felt the power of influence as I was recently conducted to the office of a senior leader of a large organization. As the door of the office was opened for me, I met the gaze of the executive for the first time. We had not met before, although I had been briefed about him. I was almost physically struck by the powerful personality of a person who was responsible for thousands of employees. On this occasion it was not a friendly or welcoming gaze. He did not know me and my unannounced visit may have come at an unwelcome time. A few minutes later, after I introduced myself and the nature of my visit, the tone of his expression changed completely and we had a warm and positive few minutes together.

An hour or so after the meeting with the senior executive I had a personal leadership conversation with one of the managers who report to him.  During the course of the conversation I realized that the strong personality and sense of authority around his boss was not always an easy thing to cope with. Depending on his own level of confidence in the presence of his boss, he may perceive such conversations to be either motivational or destructive.

Influence is an integral part of a leaders function.

After all is said and done, if a leader cannot bring about positive movement as a result of his influence, then he or she may not be a good leader at all. The above experience made me aware of the powerful impact that a leader’s ‘looks’ and perceived attitude can have on others around him. We wrote an article in this column a while ago on ‘power with’ as opposed to ‘power over’. In general a good leader focuses on developing skills in exerting power with others around him rather than trying to dominate or exert power over people. Our looks and expressions are an integral part of our sphere of influence. We like to think of our selves as reasonable and logical people, but our reactions to other people are mostly of an emotional nature, or at least often based on first impressions in a conversation or meeting. The emotional reaction of staff is triggered by perceptions of our attitudes towards them.

Make no mistake; our expressions invariably exert influence of some kind or other. They often reveal our prevalent emotions and this sends out messages to others that may often contradict the words we speak.

Building relationships of trust and respect is the core of a leader’s influence.

This is not always an easy thing to do. We need to be consistent and authentic in our actions towards others. Our values that we believe in will surface mainly by the evidence of what we do rather than what we say.

Perceptions of hidden agendas between people are a constant threat to positive relationships. 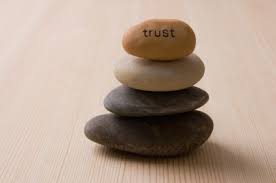 enduring friendships because of the courage of one of the parties to address possible negative feelings that appeared to exist between us. Looking back it does not seem to matter now who was right and who was wrong! Respect and trust is built on clearing the air proactively and not waiting for a crisis to do so. Trust and respect is the foundation on which the most positive influences are exerted. I am eternally grateful for my beautiful red head wife who does not allow unresolved feelings to fester between us!

During the past week I sat down with managers in a large and tough environment. These were part of a series of one on one sessions that tend to bring out the true nature and worth of the people involved. I was amazed, not for the first time either, at the courage, tenacity and positive influence that many leaders manifest when given the opportunity to perform under difficult circumstances.  I asked one of the leaders how he would rate the level of respect and trust that his reports felt towards him. I found his answer to be significant. He said he believed that the feelings of the people reporting to him would probably be similar to his own feelings towards them. He felt strong bonds of loyalty and respect for his reports and upon reflection he felt that they probably feel the same towards him. In his case the relationships with his reports had been built up over some time. The respect and trust we feel towards others is a good indicator of how they probably feel towards us!

I was once again impressed by a discussion on confrontation of perceived negative feelings with one of the managers in the same organization mentioned above. He is a powerful experienced leader who has a reputation for immediately addressing grudges or negative feelings with others. He refuses to allow bad feelings to fester. I asked him if he has ever felt regrets at his attitude of confronting negative feelings between him and others. He answered with a firm; ‘No, I have never regretted confronting differences. I hold no grudges.’ He added that he could not speak for all the other parties concerned who may or may not have retained negative feelings towards him, but he personally feels that he never regrets being up front in a respectful manner. He applies this attitude up and down the line of authority, relating to his boss as well.

Synonyms of influence include ‘power’, ‘pressure’, ‘sway’ and ‘authority’. Whatever we do as leaders, we are exerting some kind of power, pressure, sway or authority. Those of us who are dedicated to making a positive difference should not underestimate the influence that is triggered by our attitude towards others. As we share with others what we can, as we respect others and as we perform to the best of our ability to cling to positive values, we will exert influence for good and make a real difference.