Home  |  Characteristics, Attributes, and Qualities  |  A Higher Law of Leadership

A Higher Law of Leadership

Great leaders catch the spirit of the quote by Martin Luther King Jr: “Returning hate for hate multiplies hate, adding deeper darkness to a night already devoid of stars. Darkness cannot drive out darkness, only light can do that. Hate cannot drive out hate, only love can do that.” King’s quote touches on a “higher law of leadership” – the solution to a sensitive and highly flammable situation often lies in doing the opposite of what is expected and even perceived as normal” or “natural”. Then, after attempting to apply this higher law, and being unsuccessful, it is time to act tough, which could even mean going to war.

Former president Nelson Mandela showed the way. Instead of returning hate for hate he exited prison with understanding and patience. Instead of supporting the abandonment of the Springbok emblem in the mid-1990s, he encouraged ANC leadership to keep the emblem.

I am convinced that even Mandela did not always apply this higher law, because leaders are human and it is therefore very difficult to do so consistently. Fortunately he seems to have done so when it mattered most.

Jesus Christ was a perfect example of this principle. He said “love your enemies, do good to them that hate you”, and when soldiers captured him, one of his disciples reacted with anger as expected and chopped off a guard’s ear. Christ picked up the ear of his enemy and miraculously healed the guard.

After Eugene Terre’Blanche was murdered and many celebrated his death, a new AWB leader, Steyn Van Ronge, was elected. A friend of mine and I invited him for a meeting. Much to my surprise, to be honest, he agreed.

We tried to convince him to step up to the plate and apply this principle, to motivate the AWB to “retaliate” in a way opposite to what the world expected of it.

The essence of what we suggested happened a few years ago in the USA in a peaceful Amish community.  In a talk given by James E Faust he tells the story of a 32-year old milk truck driver, who was not Amish but drove a route that took him to many Amish dairy farms, where he became known as the “quiet milkman”.

One day “he suddenly lost all reason and control. In his tormented mind he blamed God for the death of his first child and some unsubstantiated memories. He stormed into the Amish school without any provocation, released the boys and adults, and tied up 10 girls. He shot the girls, killing five and wounding five. Then he took his own life.”

”This shocking violence caused great anguish among the Amish but no anger. There was hurt but no hate. Their forgiveness was immediate. Collectively they began to reach out to the milkman’s suffering family. As the milkman’s fam 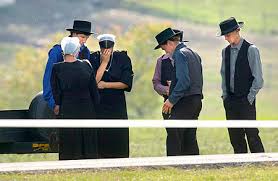 ily gathered in his home the day after the shootings, an Amish neighbour came over, wrapped his arms around the father of the dead gunman, and said: “We will forgive you.” Amish leaders visited the milkman’s wife and children to extend their sympathy, their forgiveness, their help and their love. About half of the mourners at the milkman’s funeral were Amish.  In turn, the Amish invited the milkman’s family to attend the funeral services of the girls who had been killed. A remarkable peace settled on the Amish as their faith sustained them during this crisis.”

The family of the milkman who killed the five girls released the following statement to the public: “To our Amish friends, neighbours, and local community:

Our family wants each of you to know that we are overwhelmed by the forgiveness, grace, and mercy that you’ve extended to us. Your love for our family has helped to provide the healing we so desperately need. “The prayers, flowers, cards, and gifts you’ve given have touched our hearts in a way no words can describe. Your compassion has reached beyond our family, beyond our community, and is changing our world, and for this we sincerely thank you.

“Please know that our hearts have been broken by all that has happened. We are filled with sorrow for all of our Amish neighbours whom we have loved and continue to love. “We know that there are many hard days ahead for all the families who lost loved ones, and so we will continue to put our hope and trust in the God of all comfort, as we all seek to rebuild our lives.”

The Amish people applied this higher law of leadership. They did what was most difficult and opposite to a natural response of anger, hate and resentment. Needless to say, Van Ronge unfortunately did not do this or he could not convince his executive to follow the higher law of leadership. Had they done so, in a sincere way, I am convinced it would have “changed our world” towards improvement of the race relations that continue to trouble our nation.

But hope remains. In a leadership conversation with a fairly senior black leader he referred to a sensitive situation in which a white Afrikaans-speaking subordinate clearly undermined him. His natural response was to want to discipline the man and show him who was boss. Not wrong, but also not the higher law. We discussed the higher law and he applied it excellently with a remarkable result. Their relationship improved dramatically and the employee now performs better than before.

In South Africa today we pay too much lip service to Mandela as a great leader with too little exemplification of what he did. If only this could change. Let us try to apply the higher law of leadership.

For more on creating “Leadership Fit” leaders that generate successful movement (performance) inside your organisation, contact us on info@leadershipplatform.com